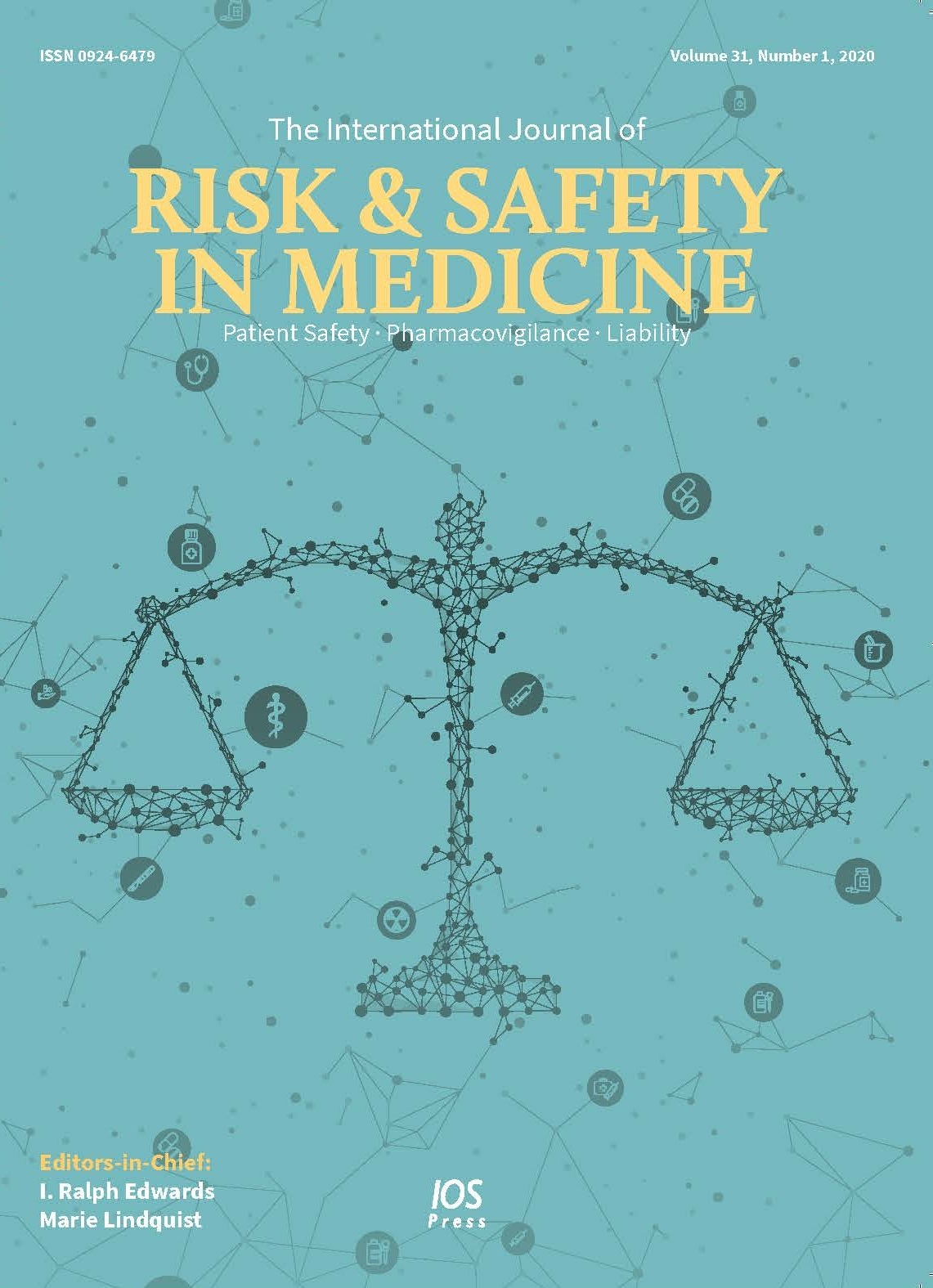 The International Journal of Risk and Safety in Medicine is concerned with rendering the practice of medicine as safe as it can be; that involves promoting the highest possible quality of care, but also examining how those risks which are inevitable can be contained and managed.

This is not exclusively a drugs journal. Recently it was decided to include in the subtitle of the journal three items to better indicate the scope of the journal, i.e. patient safety, pharmacovigilance and liability and the Editorial Board was adjusted accordingly. For each of these sections an Associate Editor was invited. We especially want to emphasize patient safety. Our journal wants to publish high quality interdisciplinary papers related to patient safety, not the ones for domain specialists. For quite some time we have also been devoting some pages in every issue to what we simply call WHO news. This affinity with WHO underlines both the International character of the journal and the subject matter we want to cover. Basic research, reports of clinical experience and overviews will all be considered for publication, but since major reviews of the literature are often written at the invitation of the Editorial Board it is generally advisable to consult with the Editor in advance. Submission of news items will be appreciated, as will be the contribution of letters on topics which have been dealt with in the journal.
Recommend this journal Editorial board Submissions
results per page

Abstract: Background: Infection-associated encephalopathies such as Reye's syndrome have been one of the major public health problems in many countries. The not dissimilar neuropsychiatric adverse reactions, including deaths, observed with Tamiflu (oseltamivir phosphate: OP) have been another current problem especially in Japan. Methods: Among the cases with neuropsychiatric adverse reactions to Tamiflu on which I was consulted, those cases in which medical charts, autopsy records and/or prescription certificates were available were analyzed and described. In order to obtain a complete view of the spectrum of neuropsychiatric adverse reactions attributed to Tamiflu and of existing knowledge of the causal relationship, adverse …reaction case reports and accounts of personal experiences were collected using PubMed, Japonica Centra Revuo Medicina, the websites of MHLW, PMDA and FDA and other Internet sources. Information on animal toxicity and clinical trial findings was derived from the texts of the officially approved data sheet for Tamiflu. Results and discussion: This paper reports eight cases in total: five of these died and three survived. Two died as a result of accidents resulting from abnormal behaviour. Three others died suddenly during sleep (two infants and one adult). One of the infants and the adult were found at autopsy to have severe lung oedema. A 14-year-old boy experienced agitation, cyanosis, loss of consciousness and seizures but recovered completely, while a 10-month-old girl showed retarded development and mental retardation after initially appearing to recover from the acute event involving loss of consciousness and seizure. A 15-year-old boy had a delayed onset of complications but developed prolonged neuropsychiatric adverse reactions after taking an almost complete course of Tamiflu; in this case the symptoms lasted for two weeks. Following our review of known clinical cases of this type, which included 80 fatalities (among them 50 instances of sudden death and 8 cases of accidental death consequential upon abnormal behaviour, and in the light of our study of animal experiments and the latest laboratory findings, we propose to classify adverse reactions to Tamiflu as follows: (1) Sudden onset adverse reactions typically occurring after taking one or two doses of Tamiflu; these result from the central nervous system suppressant action of oseltamivir, a pro-drug of oseltamivir carboxylate (OCB: an active metabolite). The group includes cases of sudden death during sleep or associated with respiratory suppression, sudden onset of abnormal behaviour and occurrence of other neuropsychiatric disorders having an acute onset but a short duration. (2) Delayed onset adverse reactions occurring after taking several doses or a full course of Tamiflu, probably caused by OCB. Examples include delayed onset neuropsychiatric reactions with prolonged duration, pneumonia, sepsis, bleeding and hyperglycemia. (3) Allergic and miscellaneous reactions involving various organs. The mechanisms underlying the adverse reactions to oseltamivir and the causal relationships may be summarized as follows: (1) Oseltamivir has a depressant effect on the central nervous system (CNS); the signs, symptoms and pathological findings are similar to those induced by hypnotics and sedatives (decreased body temperature, decreased spontaneous movements, slow/irregular breathing, cyanosis and pulmonary oedema). Severe sequels may reflect delayed neuronal damage resulting from temporary cardiopulmonary arrest. (2) Abnormal behaviour, delirium, hallucinations and even suicide could be the consequences of disinhibition or loss of control induced by the CNS depressant effect. (3) Delayed onset reactions to Tamiflu may be related to its inhibitory action on sialidase (neuraminidase), a key enzyme for antiviral activity and involved in a wide variety of mammalian physiological processes including immune functions, cell apoptosis and glucose metabolism reflecting its ability to influence the conformation of glycoproteins and gangliosides that are important components of cell structure and function. Conclusion: Three sudden deaths during sleep and two near deaths with or without sequels, as well as two deaths from accidents resulting from abnormal behaviour in older children and adolescents shortly after taking Tamiflu are probably related to the central depressant action of oseltamivir. Late onset neuropsychiatric symptoms after taking a full dose of Tamiflu, which we observed in one case, may be related to the inhibition of human neuraminidase by OCB, an active metabolite of Tamiflu. Show more

Atypical antipsychotic agents for the schizophrenia prodrome: Not a clear first choice

Abstract: Pharmacologic intervention at the earliest stages of suspected psychotic illness is an intuitively appealing concept and a logical extension of the current approach to many other diseases of the central nervous system. Atypical antipsychotic agents (ATAPs) seem to be a reasonable choice for early intervention because existing pre-clinical data suggest that they have pharmacologic properties which might confer ‘neuroprotection’. However, a critical analysis of the results of structured clinical investigations which have explored the use of ATAPs for new-onset psychotic symptoms raises safety concerns and does not support pre-medication in this setting as a preventive strategy. Caution in current practice …is therefore appropriate, underscoring the need for much additional clinical research. Show more

Abstract: Objective: To determine the blood pressure goal attainment and pattern of antihypertensive therapy in type 2 diabetic hypertensive patients. Design and setting: An observational study done in a tertiary care hospital in Northern India. Subjects and methods: Diabetic hypertensive patients visiting the endocrinology outpatient department were enrolled in the study. Information was gathered on the patient's demographic and clinical data. Blood pressure values less than 130/80 mmHg were considered to be controlled. Results: Of the 320 patients studied, only 11.2% had their blood pressure controlled, as per JNC 7 guidelines. A majority (60%) of the patients were …treated with multidrug regimen. Angiotensin converting enzyme inhibitor and angiotensin receptor blockers were prescribed to 93.8% of the patients. Conclusion: Despite a good use of antihypertensive agents, 88.8% of the patients had uncontrolled blood pressure, and hence microvascular and macrovascular complications were more prevalent among this population. Show more

Abstract: Objective: To formulate a system which has been developed for the purpose of accomplishing the function of the Jiangsu Center for ADR Monitoring according to the international Pharmacovigilance practices. Method: The ADRs signal is considered the core of the ADR monitoring system, including drug safety information collection, handling, and also associated communication processes. Results: Regional Pharmacovigilance can effectively keep the public safe in drug use and offer a reference for drug policy in the future. Conclusion: The experiences of Jiangsu Center for ADR Monitoring will help establish a foundation for developing the consummate Pharmacovigilance system and provide …knowledge, experience and advice to other regional professional organizations. Show more

Attitudes to pharmaceutical promotion techniques among healthcare professionals in the Republic of Tatarstan, Russia

Abstract: Selective reporting is prevalent in the medical literature, particularly in industry-sponsored research. In this paper, we expose selective reporting that is not evident without access to internal company documents. The published report of study 329 of paroxetine in adolescents sponsored by GlaxoSmithKline claims that “paroxetine is generally well tolerated and effective for major depression in adolescents”. By contrast, documents obtained during litigation reveal that study 329 was negative for efficacy on all 8 protocol specified outcomes and positive for harm.

Abstract: Background: The objective of this study was to analyse and compare the potential effectiveness of two safety strategies in reducing scalpel blade injuries. The two strategies examined were safety scalpel vs. a single-handed scalpel blade remover combined with a hands free passing technique (HFPT) (e.g. passing tray or neutral zone). Methods: This was a retrospective study involving review of a 550-bed adult metropolitan tertiary referral hospital's sharps injuries database, chart review, and hypothetical modelling of the data to determine potential preventable injuries. The modelling was done twice, firstly assuming 100% effectiveness of each safety device and secondly using previously …published activation rates for “active” safety devices which were considered to be a more accurate reflection of real-life work practices. Results: A total of 141 scalpel injuries were reported between 1987 and 2003. Clinical charts were reviewed for 137 of these injuries. Just under 50% of injuries were sustained while the scalpel was in use and these were assumed to be not preventable. Assuming 100% effectiveness for each safety device resulted in 72 injuries being prevented by safety scalpels and 69 injuries being prevented by a combination of a single-handed scalpel blade remover and an HFPT. When injury prevention was calculated using published data on activation rates for “active” safety devices, the number fell to as low as 12 for safety scalpel and to 61 for the combination of a single-handed scalpel blade remover and an HFPT. Conclusion: Both safety strategies are potentially effective in reducing scalpel blade injuries. However the safety scalpels are active devices and as such are subject to widely variable activation rates. We recommend use of a single-handed scalpel blade remover in combination with an HFPT as this can potentially prevent 5 times as many injuries as safety scalpels. Show more

Abstract: The professional care of patients with varying degrees of dementia over time may implicate a variety of legal (as well as ethical) considerations. Important legal issues arise in the context of medical decision making concerning diagnostic tests, therapeutic treatments and research participation. Questions about informed consent, decisional capacity, advance planning, and the extent and limits of surrogate decision makers' authority to speak on behalf of incapacitated patients are implicated. This article outlines some of the most salient aspects of these legal issues as they pertain to the long term management of persons with dementia.