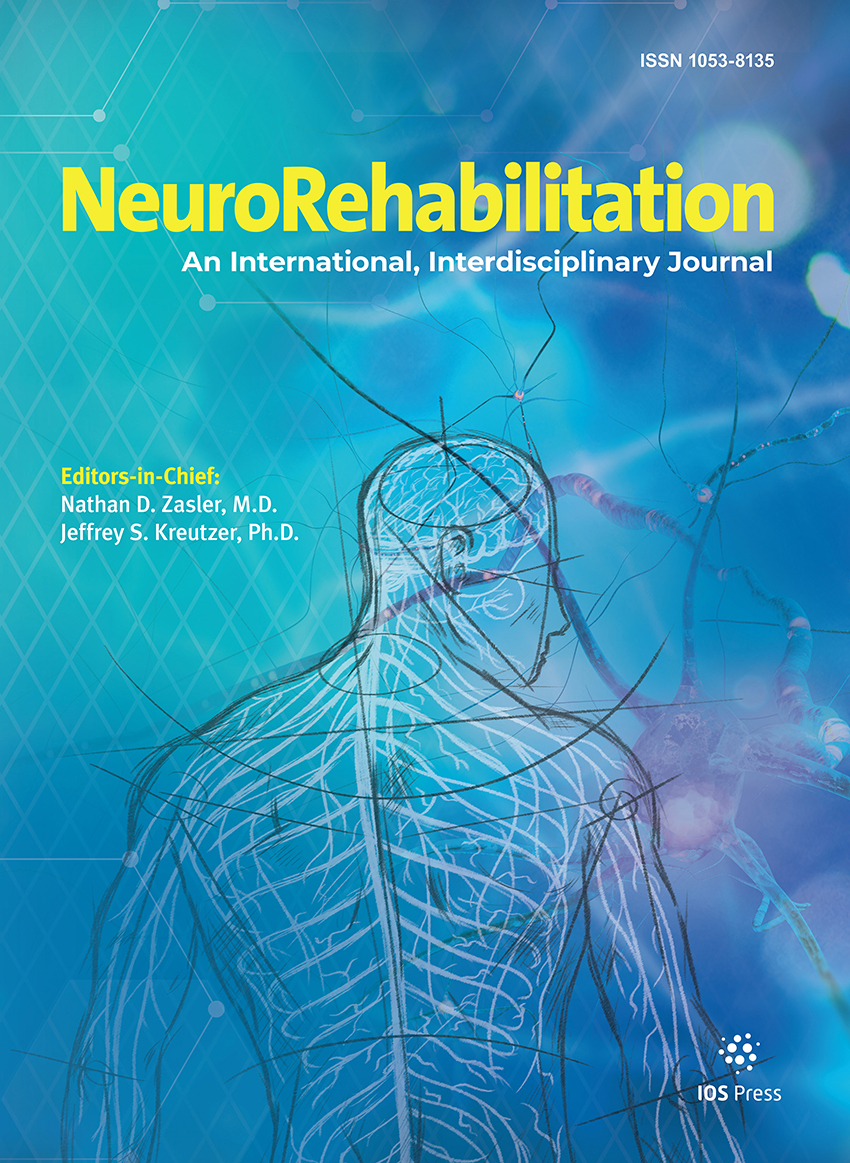 We also publish thematically organized issues that focus on specific clinical disorders, types of therapy and age groups. Proposals for thematic issues and suggestions for issue editors are welcomed.

Abstract: Tremendous advances in neuroimaging methods and analytic techniques hold great promise in providing the rehabilitation clinician with a much greater understanding of brain pathology and its potential influence on rehabilitation outcome. This special issues of NeuroRehabilitation overviews the field. Contemporary neuroimaging methods are reviewed specifically in traumatic brain injury (TBI), anoxic brain injury (ABI) and stroke. Innovative methods combined with standard quantitative metrics and traditional clinical assessment provide the rehabilitation clinician with multiple methods to best understand the nature and extent on underlying neuropathology and how to use this information in guiding rehabilitation therapies and predicting outcome.

A primer of neuroimaging analysis in neurorehabilitation outcome research

Abstract: Although most neurological patients that enter a rehabilitation treatment program have had either a computed tomography (CT) or magnetic resonance imaging (MRI) scan, the utilization of neuroimaging in rehabilitation has been limited. However, a number of new MRI methods for image analysis hold great promise to better inform the neurorehabilitation clinician. The current review provides a foundation in neuroimaging fundamentals for neurorehabilitation specialists and examines the progress in using such techniques as quantitative MRI analyses, diffusion tensor imaging (DTI) and functional MRI to better understand the neurologically impaired patient.

Abstract: Introduction: There is a need to more accurately diagnose milder traumatic brain injuries with increasing awareness of the high prevalence in both military and civilian populations. Magnetic resonance imaging methods may be capable of detecting a number of the pathoanatomical and pathophysiological consequences of focal and diffuse traumatic brain injury. Susceptibility-weighted imaging (SWI) detects heme iron and reveals even small venous microhemorrhages occurring in diffuse vascular injury. Diffusion tensor imaging (DTI) reveals axonal injury by detecting alterations in water flow in and around injured axons. The overarching hypothesis of this paper is that newer, advanced MR imaging generates sensitive biomarkers …of regional brain injury which allows for correlation with clinical signs and symptoms. Methods: Studies involving subjects with a history of traumatic brain injury as well as healthy, non-trauma controls were used. Analysis involved comparison of TBI patients’ imaging results with healthy controls as well as correlation of imaging findings with clinical measures of injury severity. An additional animal study of Sprague-Dawley albino rats compared imaging results with histopathological findings after the animals were sacrificed and stained for b-APP. Results: SWI revealed small foci of hemosiderin for some patients while aggregate lesion volume on SWI correlated with clinical injury severity indices. Similarly, DTI showed striking group differences for fractional anisotropy over the white matter globally, while tract and voxel-based regional results colocalized with SWI and FLAIR lesions in some cases and correlated with clinical deficits. For the rats, correlations were seen between imaging findings and staining of axonal injury. Discussion: Animal data gave important tissue correlations with imaging results. SWI and DTI are commercially available sequences that can improve the diagnostic and prognostic ability of the trauma clinician. These biomarkers of regional brain injury which are present in imaging shortly after acute injury and persist indefinitely can inform clinicians and researchers about not only injury severity but also which neurobehavioral systems were injured. Analogous to stroke rehabilitation, having an understanding of the distribution of brain injury should ultimately allow for development of more effective rehabilitation strategies and more efficient clinical interventional trials. Show more

Abstract: Diffusion tensor imaging (DTI) has widely been used to investigate the microstructural damage of white matter tracts that occur in individuals with traumatic brain injury (TBI). In the current review, we discuss the white matter regions which are commonly affected in adults with TBI. We also describe the current literature that has utilized DTI to investigate the relationship between microstructural integrity with neuropsychological performance and clinical outcome measures. Finally, a model is presented of the potential utilization of DTI as a biomarker of efficacy in neurorehabilitation for individuals with TBI.

Abstract: Traumatic brain injury (TBI) commonly results in residual memory difficulties. Such deficits are amenable to cognitive rehabilitation, but optimal selection of rehabilitation interventions remains a challenge. We hypothesized that diffusion tensor imaging (DTI) could be used to predict which individuals were likely to benefit from a specific memory rehabilitation intervention. Thirty-seven individuals with TBI, of all severities, first underwent DTI scanning, along with 18 matched controls. Participants with TBI then attended a 12-session memory intervention emphasizing internal memory strategies (I-MEMS). Primary outcome measures (HVLT, RBMT) were collected at the time of DTI scanning, and both immediately and one month post-therapy. …In contrast to typical neuroimaging analysis, fractional anisotropy (FA) was used to predict long-term outcome scores, adjusting for typical predictors (injury severity, age, education, time since injury, pretest score). FA of the parahippocampal white matter was a significant negative predictor of HVLT, while the anterior corpus callosum, left anterior internal capsule, and right anterior corona radiata were negative predictors of RBMT outcome. The importance of these predictors rivaled those of pretest scores. Thus, FA measures may provide substantial predictive value for other cognitive interventions as well. The reason why higher FA was associated with less successful response to cognitive intervention remains unclear and will require further study. Show more

Abstract: Survivors of critical illness frequently have severe and long-lasting cognitive impairments and psychiatric disorders, which adversely affect functional outcomes including return to work, and quality of life. While data regarding cognitive outcomes has increased over the last 15 years, neuroimaging data in medical and surgical critical populations is extremely limited. The abrupt development of new significant cognitive impairments after critical illness along with abnormalities on neuroimaging suggest that critical illness results in new acquired brain injury, similar to that observed in other acquired brain injuries. Abnormalities on neuroimaging including cortical and subcortical lesions, brain atrophy, and white matter hyperintensities (WMH) …which occur in widely distributed brain regions. Patients admitted to neurorehabilitation who received critical care related to their primary diagnosis may have sustained neurological injury from the nonspecific effects of their critical illness and as demonstrated in this review, generalized, non-specific neuroimaging findings may be observed and quantified. Given the high prevalence rate of cognitive impairments in this population, neuroimaging is important to help elucidate neuropathology of critical illness acquired brain injury and may be beneficial in guiding rehabilitation outcomes in this population. Show more

Abstract: Anoxic brain injury is common and occurs in a wide variety of disorders. The anoxic injury has characteristic pathologies in particular affecting the medial temporal lobe, basal ganglia and deep white matter. The neural injury is associated with significant and persistent cognitive impairments and poor functional outcomes, related in part to the severity of anoxia and assumed to relate to the degree of structural damage evidenced on neuroimaging during the chronic stage. To date neuroimaging following ABI has been used diagnostically with less research focused on guiding or predicting rehabilitation outcome. Because of the distribution of these lesions/abnormalities the degree …of damage has practical implications for rehabilitation outcome. Research is needed to understand cognitive and functional outcomes following ABI as well as whether specific rehabilitation techniques or strategies will result in better outcomes. Show more

Abstract: Advances in neuroimaging have greatly improved our understanding of stroke not only in the acute, but also in the subacute and chronic stages of recovery. More recently developed magnetic resonance techniques such as diffusion and perfusion weighted imaging, as well as more traditional magnetic resonance and computed tomography studies allow clinicians to more accurately diagnosis stroke subtypes, optimize treatment, and predict prognosis. Although not widely utilized for clinical use, functional neuroimaging techniques have also been shown to be useful in terms of predicting prognosis and advancing our understanding of reorganization and recovery following stroke. Thus, neuroimaging in stroke may also …be utilized to monitor response to both medical treatment as well as physical rehabilitation. The following is a review of current research relevant to the field of neuroimaging of stroke. We begin with a discussion of structural imaging techniques with the goal of familiarizing the reader with recent developments in this area. Next, the discussion moves to functional imaging, its role in advancing our understanding of neuronal reorganization and functional recovery following stroke, and its usefulness at predicting recovery. Finally, a brief discussion regarding the future of neuroimaging and its implications for stroke and stroke recovery is presented. Show more