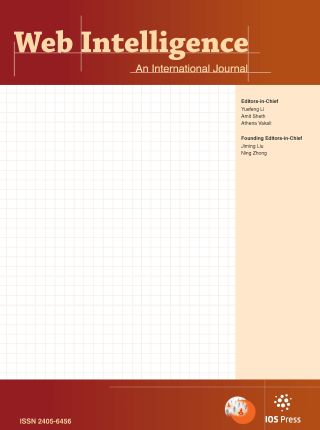 Web Intelligence (WI) is an official journal of the Web Intelligence Consortium (WIC), an international organization dedicated to promoting collaborative scientific research and industrial development in the era of Web intelligence. WI seeks to collaborate with major societies and international conferences in the field. WI is a peer-reviewed journal, which publishes four issues a year, in both online and print form.

WI aims to achieve a multi-disciplinary balance between research advances in theories and methods usually associated with Collective Intelligence, Data Science, Human-Centric Computing, Knowledge Management, and Network Science. It is committed to publishing research that both deepen the understanding of computational, logical, cognitive, physical, and social foundations of the future Web, and enable the development and application of technologies based on Web intelligence. The journal features high-quality, original research papers (including state-of-the-art reviews), brief papers, and letters in all theoretical and technology areas that make up the field of WI.

Abstract: Recommender systems aim to provide users with preferred items to address the information overload problem in the Web era. Social relations, item connections, and user-generated item reviews and ratings play important roles in recommender systems as they contain abundant potential information. Many methods have been proposed to predict users’ ratings by learning latent topic factors from their reviews and ratings of corresponding items. However, these methods ignore the relationships among items and cannot make full use of the complicated relations between reviews and ratings. Motivated by this observation, we integrate ratings, reviews, user connections and item relations to improve recommendations …by combining matrix factorization with the Latent Dirichlet Allocation (LDA) model. Experimental results on two real-world datasets prove that item–item relations contain useful information for recommendations, and our model effectively improves recommendation quality. Show more

Abstract: Ontology mappings are regarded as the semantic bridges that link entities from different yet overlapping ontologies in order to support knowledge sharing and reuse on the Semantic Web. However, mappings can be wrong and result in logical conflicts among ontologies. Such kind of mappings are called incoherent mappings. As an important part of ontology matching, mapping validation aims at detecting the conflicts and restoring the coherence of mappings. In this paper, we propose a graph-based approach which is complete for detecting incoherent mappings among DL-Lite ontologies. The lightweight DL-Lite family of description logics stand out for tractable reasoning and efficient …query answering capabilities. Our approach consists of a set of graph construction rules, a graph-based incoherence detection algorithm, and a graph-based incoherence repair algorithm. We propose and formalize three repair principles in an attempt to measure the wrong mappings, where the notion of common closures w.r.t. a mapping arc in the constructed graph is introduced. These principles feature a global removal strategy that is independent of individual ontology matchers. In order to relieve the loss of information among ontologies in the repair process, we further define a mapping revision operator so that common closures related to the removed mappings can be preserved in the graph. We implement the graph-based algorithms and evaluate their performance in a comparison with state-of-the-art systems on real-world ontologies. Experimental results show that our approach can remove more wrong mappings and achieve better repairing results in most of the cases. Show more

Abstract: Majority of the studies on counter-terrorism using social network analysis consider homogeneous networks built over either terrorists or terrorist organizations. However, terrorist attacks are often defined using heterogeneous attributes such as location, time, target type, organization, etc. This paper constructs a heterogeneous terrorist attack network considering heterogeneous attributes and captures heterogeneous influences propagated from different attributes using Personalized PageRank. Personalized PageRank is a flexible model capable of propagating supervised information while traversing over a network using different personalized parameters. This study investigates effects of various parametric setups to study influence of various factors such as news media discussions, historical activities, …temporal behavior etc., on one of the important counter-terrorism problems; prediction of future attacks of a terrorist organization. From various experimental observations, it is evident that news media discussion and network’s temporal behavior have a positive influence on future activities of a terrorist organization. Further, this paper investigates responses of various node proximity based link prediction methods on predicting future relationships between a terrorist organization with other attributes (such as country, city and target types). Majority of the studies on link prediction using node proximity ignore node importance. However, in a heterogeneous environment, nodes from different classes may have different importance. This paper proposes new variants of four proximity based link prediction methods, namely, Adamic Adar, Jaccard Coefficient, Resource Allocation, and Common Neighbor, which have the capability to incorporate node importance. With suitable experiments, we show that the proposed variants of link predictors are more accurate at predicting relations than their state of art counterparts. Show more

Abstract: Social Networks have experienced increased popularity and rapid growth in recent years. Recommendation is significant for users due to the extremely large amount of information in Social Networks. Most existing recommender systems rely on collaborative filtering techniques which focus on recommending the most relevant items to users based on past rating information of users or items. In Social Networks, the cold-start and data sparsity problems are very serious because new users and items are growing rapidly. Taking the Event Recommendation problem in Event-Based Social Networks as a scenario, many events are newly created and have few feedbacks. Existed collaborative filtering …based methods will fail for Social Recommendation due to these problems. Therefore, a more sophisticated recommendation mechanism that can efficiently combine various contextual information to further improve recommendation quality is desired. In this paper, we propose a Context Aware Matrix Factorization model called CAMF which models implicit feedbacks and various contextual information simultaneously for Social Recommendation. Specifically, CAMF is a unified model that combines the Matrix Factorization model which models implicit feedbacks with the Linear Contextual Features model which models explicit contextual features. Extensive experiments on a large real-world dataset demonstrate that the CAMF model significantly outperforms state-of-the-art methods by 12.7% in terms of accuracy for the Event Recommendation problem. Show more