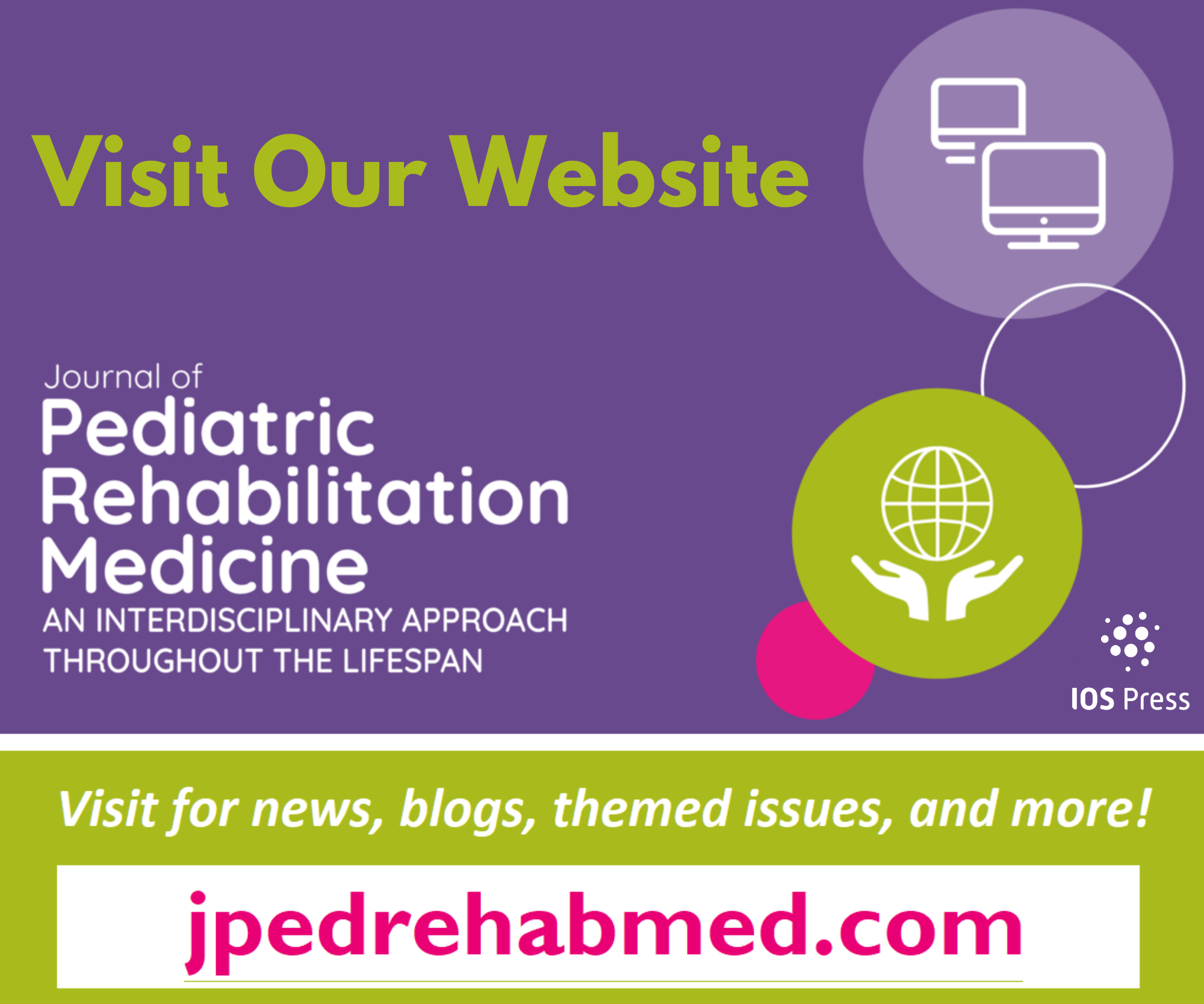 Participation of the child with cerebral palsy in the home, school, and community: A review of the literature

Abstract: Improving participation of children with cerebral palsy is an important outcome in the practice of pediatric rehabilitation. Current knowledge of how a child's interactions with various environments influence participation can affect care provision to children with cerebral palsy. The literature was searched using electronic databases and reference lists from 1991 to 2008. Studies included reports on one or more factors influencing a child's participation. Using the International Classification of Function, Disability, and …Health (ICF) as a framework, factors that influence participation are summarized. Show more

Neurodevelopmental disabilities in pediatrics and child neurology: Child development training for the future

Abstract: Low bone mass and subsequent increased risk of fractures is a common finding in children with cerebral palsy. The available literature on this topic has increased over the last decade. The following is a review of the prevalence of fractures in this population, a description of the factors that are associated with reduced bone mineral density, and a summary of the interventions that have been reported to improve osteopenia and osteoporosis in children with cerebral palsy.

Management of neurogenic bladder in patients with cerebral palsy

Abstract: Cerebral palsy (CP) is a non-progressive injury of the brain that affects muscle movement and coordination secondary to anoxia that occurred during the perinatal period. Babies who are premature, low birth weight, and those who sustained perinatal infection, seizure, or intracranial hemorrhage are at an increase risk of being affected. The injury mainly involves the motor control center of the brain; therefore, presents clinically with variable physical impairments, ranging from delayed gross or fine motor development …to altered muscle tone and gait. With public awareness and research, the full spectrum of intelligence and capabilities of these children is now being appreciated. Studies have shown that with supportive caretakers, many of these children go on to enjoy near-normal adult lives. Therefore, it is imperative that their physical disabilities are identified and managed properly. In this review, we will focus primarily on urologic evaluation and management of patients with CP, with a brief review of normal bladder physiology and voiding pattern. Show more

Abstract: Project Export/Cerebral Palsy Project was a three-year study funded by the National Institute of Health (1R24 MD000509-01) to investigate barriers to adequate and appropriate therapy services for children and adults with Cerebral Palsy who are living in the south metropolitan region of Chicago. This study examined barriers individuals with Cerebral Palsy (CP) and their families encounter when accessing Occupational Therapy (OT) and Physical Therapy (PT) services in the region. The study utilized a 3-tiered investigation system …(survey, educational forum, and focus groups) that provided families and community therapists opportunities to identify barriers that impact access to evaluations and ongoing therapy services for individuals with Cerebral Palsy. The findings revealed a multitude of barriers identified by family and therapist participants. These barriers included, but are not limited to, financial resources, availability of therapists, convenient appointment times, and transportation issues. The educational forum and focus groups were effective in identifying knowledge gaps regarding Cerebral Palsy and strategies for accessing therapy in the region. Future plans include continuing collaborative initiatives for families and therapy providers. These include community educational forums that are accessible and provide relevant information, opportunities for networking, and advocacy information. The findings of the study will also be utilized to help occupational and physical therapists develop and implement alternative models of service delivery that provide greater access to therapy services for individuals with Cerebral Palsy. Show more

Abstract: The aim of this study was to examine bronchoscopy findings for children and young adults with long-term tracheostomies due to congenital anomalies and neurological impairment and identify characteristics associated with abnormal bronchoscopic findings. We conducted a retrospective study of 128 bronchoscopy cases (81 children) at a pediatric rehabilitation center. Thirty-eight cases (30%) had normal findings and 14 children (17% of all children) were decannulated following bronchoscopy. Ninety cases (70% of cases) had …abnormal findings (e.g. granulomas, airway inflammation, fixed obstruction). An acute indication for bronchoscopy was the strongest predictor of an abnormal finding, while age (younger) and diagnosis (multiple congenital anomalies (MCA)) also were associated with abnormalities. For a subsample of children undergoing bronchoscopy for routine surveillance (n= 90), underlying diagnosis (MCA) was the strongest predictor of an abnormal finding, while younger age contributed slightly. These findings add to the limited literature describing bronchoscopic findings in children and youth with tracheostomies due to congenital anomalies or neurological impairment. These findings may be useful for rehabilitation clinicians in determining care needs for children with long-term tracheostomy. Show more

Intensity, perception, and descriptive characteristics of chronic pain in children with cerebral palsy

Abstract: Objectives: Children with cerebral palsy (CP) experience bodily pain, leading to functional impairment and decreased quality of life. The purpose of this study is to characterize subjective descriptors of chronic pain in children with CP. Methods: One hundred fifty-seven children were invited to participate in a quantitative pilot survey. Parents were mailed the Varni-Thompson Pediatric Pain Questionnaire, designed to assess three dimensions of pain: sensory (physical aspects), affective (emotional response), …and evaluative (the combined intensity of the emotional and physical responses). Parents assessed their child's pain using non-verbal and verbal cues. Results: Fifty-two families responded (33% return rate). Thirty-eight children ages 6–8 years with CP and Gross Motor Function Classification System (GMFCS) levels I–V were included. Ninety percent of families reported that their child was experiencing some pain at the time of the survey. At the time of assessment the children's pain was mild. Their pain, at its worst, was in the distressing range. The two largest GMFCS groups of children, levels I and IV, were compared in both severity and intensity of pain experienced. Increasing intensity of pain was reported in children in the level IV group compared to children classified as level I. Pain severity in all dimensions was reported as increasing in Level IV children compared to Level I. Discussion: Children with CP experience frequent pain, which increases with worsening impairment. Descriptive qualifiers of pain help to elucidate the etiology of various types of pain which would lead to the development of more effective approaches to pain management and treatment. Show more

Adapted recreational and sports programs for children with disabilities: A decade of experience

Abstract: Objective: To identify and describe community based adapted sports and recreational programs (SARPs) for children with physically disabilities, documenting program types, benefits, challenges, growth and/or decline, and lessons they have learned over a 10-year period. Methods: In 1996, a total of 277 children's hospitals and freestanding rehabilitation hospitals stating that they provided pediatric rehabilitation services were contacted and asked to provide information regarding adapted recreational and sports programs in their …region. Seventy-nine SARPs were identified, contacted, and survyed about programming, benefits and challenges they faced. They were then re-surveyed in 2006 for comparison data. Results: Ten years ago, the average SARP served 25 or fewer clients and was led by a therapeutic recreation specialist with assistance from volunteers. Most programs had been in place for 5 years or more, met weekly for 2–3 hours, and were recreational in orientation. Activities varied, with basketball, aquatics, horseback riding and snow skiing being most common. Fund-raisers and grants supported most programs, and securing funding was their greatest challenge. Participant benefits noted by programs included improved socialization, enhanced physical fitness, increased self esteem, improved therapeutic skills (ADL's, transfers, etc.), enhanced cognition, expanded client independence, improved community relations, and enhanced leisure skills. Ten years later, the majority of SARPs noted similar benefits, and reported an increase in number of participants despite continued challenges with funding and staffing. Leadership and mentorship by those with disabilities was still very low, but community awareness of the abilities of those with disabilities had increased. Conclusions: Adapted sports and recreation programs surveyed in 1996 and again in 2006, report overall that their health is good, and many have retained the same programming, financial support mechanisms, leadership and participant mix over the years. Many have increased athlete participation despite financial challenges being a predominant concern. They report that their staying power is dependent on many factors, including leadership, participant referrals, an ample supply of volunteers, and consistent community and financial support. They feel that their success is important to the physical and psychological well-being of individuals with disabilities and that an increased focus on corporate sponsorship, participation and mentorship by those with disabilities may assist with future growth. Increased school involvement, development of more competitive vs. recreational programs, and improved research documenting the physical and psychological benefits of adapted sports programs were also recommended to improve future SARP stability. Show more

Abstract: The extent to which high muscle tone contributes to the caloric needs of children with cerebral palsy (CP) is debated. Understanding its contribution is important in predicting calorie needs in this population which frequently experiences under nutrition. Intrathecal baclofen is an innovative therapy now used for treatment of excessive tone. We prospectively studied the changes in resting energy expenditure (REE) observed in 12 children with CP undergoing intrathecal baclofen injection. REE was measured in the fasting …state before intrathecal injection of 50 micrograms of baclofen. Patients remained fasting and REE measures were repeated four hours later. Tone changes were assessed using the Modified Ashworth Scale at the same time points. One child was excluded from study because he became increasingly agitated over the observation period and one child demonstrated no tone reduction after the baclofen injection. In the remaining 10 patients, the average REE prior to injection was 101 ± 17% of predicted and decreased to 84 ± 24% of predicted after injection (p<0.004). This study suggests that tone contributes substantially to the caloric needs of children with CP and must be carefully considered when providing nutritional recommendations. Show more