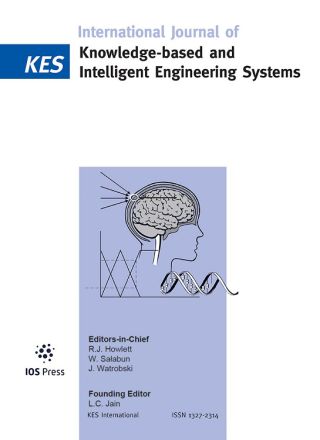 The aim of research into Knowledge-Based and Intelligent Engineering is to develop systems that replicate the analytical, problem solving and learning capabilities of the brain. These systems bring the benefits of knowledge and intelligence to the solution of complex problems. This international journal provides a forum for publishing the results of recent research into the applications of intelligent systems, and also the tools and techniques necessary for them.

Authors are invited to submit original unpublished work that is not currently under consideration for publication elsewhere, on the following topics:

Abstract: Classifying haemodialysis sessions, on the basis of the evolution of specific clinical variables over time, allows the physician to identify patients that are being treated inefficiently, and that may need additional monitoring or corrective interventions. In this paper, we propose a deep learning approach to clinical time series classification, in the haemodialysis domain. In particular, we have defined two novel architectures, able to take advantage of the strengths of Convolutional Neural Networks and of Recurrent Networks. The novel architectures we introduced and tested outperformed classical mathematical classification techniques, as well as simpler deep learning approaches. In particular, combining Recurrent Networks …with convolutional structures in different ways, allowed us to obtain accuracies above 81%, coupled with high values of the Matthews Correlation Coefficient (MCC), a parameter particularly suitable to assess the quality of classification when dealing with unbalanced classes-as it was our case. In the future we will test an extension of the approach to additional monitoring time series, aiming at an overall optimization of patient care. Show more

Abstract: Multilayer Fuzzy Cognitive Maps (MFCM) represents an approach for analyzing situations, which allows the simulation, inference, theorem proving of tendencies, and verification of theories, among other things. This paper reviews the promise of this method in a novelty case study of management of professional sports clubs. Professional sports clubs have the possibility of making their management profitable through the proper management of their commercial product portfolio. This possibility is conditioned by the adequate configuration of each component of the commercial product portfolio, namely: Brand licensing, sponsorship, television and media rights, sporting and training rights, and hospitality. Each component of the …commercial portfolio must maximize its attractiveness and desirability for each target customer segment. For these purposes, tools that contribute to manage the sports products will be vital to guarantee their commercial success. This article proposes a model based on MFCMs for supporting the management of products in professional sports – an intelligent decision-making system –, conceptually based on the “par conditio” principle. The model considers different aspects related to the “par conditio” principle, such as the socioeconomic environment where the sports activity is carried out, the legal bases of the professional competence, and other sporting aspects (stadium, fans, etc.), which are organized in layers, to analyze the behavior of the different components of the commercial portfolio. It is tested for the two most common sports in Latin America, football and baseball, considering countries of this region where these sports have good economic performance, both to analyze and understand the current situation of the sports products, and infer more appropriate configurations. Several specific case studies are carried out with encouraging results. The paper successfully shows the potentialities of MFCM for diverse purposes, particularly those named above. Show more

Abstract: Since texture is prominent low level feature of an image, most of the image processing and computer vision applications rely on this feature for efficient extraction, retrieval, visualization and classification of the images. Hence, the texture analysis method mainly concentrates on efficient feature extraction and representation of the image. The images captured and analyzed in many of the applications are not in same (or) similar scale, orientation and illumination and also texture has regular, stochastic, periodic, homogeneous (or) inhomogeneous and directional in nature. To address these issues, recent texture analysis method focused on efficient and invariant feature extraction and representation …with reduced dimension. Hence this paper proposes a invariant texture descriptor, Locality preserving Rotation Invariant Modified Directional Local Binary Pattern (LRIMDLBP) based on LBP. The classical LBP descriptor is widely used in most of the texture analysis applications due to its simplicity and robustness to illumination changes. However, it does not efficiently capture the discriminative texture information because it uses sign information and ignores the magnitude value of the neighborhood and also suffers from high dimensionality. Hence to improve the performance of LBP, many variants are proposed. Though most of these LBP variants are either geometrical or direction invariant, fails to address the spatial locality and contrast invariance. To address these issues, the proposed LRIMDLBP incorporates spatial locality, contrast and direction information for rotation invariant texture descriptor with reduced dimension. The proposed LRIMDLBP consists of 5 phases: (i) Reference point identification, (ii) Magnitude calculation, (iii) Binary Label computation based on threshold, (iv) Pattern identification in dominant direction and (v) LRIMDLBP code computation. The locality and rotation invariance is achieved by identifying and using reference point in a local neighborhood. The reference point is a dominant pixel whose magnitude is large in the neighborhood excluding center pixel. The spatial locality and rotation invariance is achieved by preserving the weights of LBP dynamically based on the reference point. The proposed method also preserves the direction information of the texture by comparing the magnitude of the pixel in the four dominant directions such as horizontal, vertical, diagonal and anti-diagonal directions. Finally the proposed invariant LRIMDLBP descriptor computes histogram based on decimal pattern value. The proposed LRIMDLBP descriptor results in texture feature with reduced dimension when compared to other LBP variants. The performance of the proposed descriptor is evaluated with large and well known four bench mark texture datasets namely (i) CUReT, (ii) Outex, (iii) KTS-TIPS and (iv) UIUC against three classifiers such as (i). K-Nearest Neighbor (K-NN), (ii). Support Vector Machine (SVM) with Radial Basis Function (RBF) and (iii). Gradient Boosting Classifier (GBC). The intensive experimental result shows that the ensemble based GBC yields superior classification accuracy of 99.38%, 99.43%, 98.67% and 98.82% for the datasets CUReT, Outex, KTH-TIPS and UIUC respectively when compared with other two classifiers and also improves the generalization ability. The proposed LRIMDLBP descriptor achieves approximately 15% more classification accuracy when compared with traditional LBP and also produces 1% to 2.5% more classification accuracy compared with other state of the art LBP variants. Show more

Abstract: Collaborative filtering (CF), a representative algorithm of recommendation systems, is a method of using information of the neighbors of active user. The main idea of CF is that users who agreed in the ratings of certain items are likely to agree again in new items. The degree to which the two users’ tendencies in the ratings of the co-rated items are consistent is measured using a similarity measure. Therefore, the similarity measure in CF plays a key role in the extraction of the representative neighbors. Studies on the improvement of similarity indicators for selecting representative neighbors are still ongoing. Recently, …a new similarity measure, named OS, was proposed to enhance the recommendation performance by utilizing mathematical equations, such as the integral equation, system of linear differential equations, and non-linear systems. This study aims to understand the limitations of OS and overcome these limitations using the proposed method. In the proposed method, a sigmoid function was used to reflect preferences, such as the positive or negative sentiment of user ratings. In addition, to consider the absolute score difference, some of the formulas were modified, and finally, the performance improvement of the recommendation system was proved through experiments. Show more

Abstract: With global resource waste and environmental pollution becoming increasingly serious, corporate environmental performance (CEP) has received much attention from researchers over the past decade. As an important part of economic development, enterprises also pay increasingly attention to environmental protection and pollution control. CEP is regarded as the result of corporate environmental management. Assessing CEP can not only make enterprises focus on the environmental protection and management, but also promote sustainable social development. And it is frequently viewed as a multi-attribute group decision-making (MAGDM) issue. Thus, a novel MAGDM method is needed to tackle it. Depending on the conventional TOPSIS (Technique …for Order Preferenceby Similarity to Ideal Solution) method and intuitionistic fuzzy sets (IFSs), this essay design a novel intuitive distance based IF-TOPSIS method to assess CEP. First of all, a related literature review is conducted. What’s more, some necessary theories related to IFSs are briefly reviewed. In addition, since subjective randomness frequently exists in determining criteria weights, the weights of criteria is decided objectively by utilizing CRITIC method. Afterwards, relying on novel distance measures between IFNs, the conventional TOPSIS method is extended to the intuitionistic fuzzy environment to calculate assessment score of each enterprise. Eventually, an application about CEP evaluation and some comparative analysis have been given to demonstrate the superiority of the designed method. The results illustrate that the designed framework is useful for assessing CEP. Show more