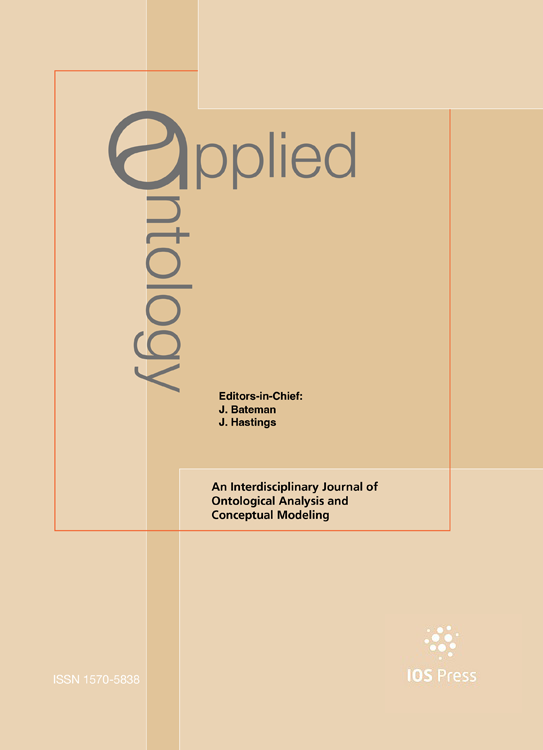 Applied Ontology focuses on information content in its broadest sense. As the subtitle makes clear, two broad kinds of content-based research activities are envisioned: ontological analysis and conceptual modeling. The former includes any attempt to investigate the nature and structure of a domain of interest using rigorous philosophical or logical tools; the latter concerns the cognitive and linguistic structures we use to model the world, as well as the various analysis tools and methodologies we adopt for producing useful computational models, such as information systems schemes or knowledge structures.

Applied Ontology is the first journal with explicit and exclusive focus on ontological analysis and conceptual modeling under an interdisciplinary view. It aims to establish a unique niche in the realm of scientific journals by carefully avoiding unnecessary duplication with discipline-oriented journals. For this reason, authors will be encouraged to use language that will be intelligible also to those outside their specific sector of expertise, and the review process will be tailored to this end. For example, authors of theoretical contributions will be encouraged to show the relevance of their theory for applications, while authors of more technological papers will be encouraged to show the relevance of a well-founded theoretical perspective. Moreover, the journal will publish papers focusing on representation languages or algorithms only where these address relevant content issues, whether at the level of practical application or of theoretical understanding. Similarly, it will publish descriptions of tools or implemented systems only where a contribution to the practice of ontological analysis and conceptual modeling is clearly established.

Applied Ontology aims at being a major publication forum for theoretical and applied research in a variety of topics, tentatively grouped together in research areas, examples of which are indicated in the list below.

Meaning in Context: Ontologically and linguistically motivated representations of objects and events

What to consider about events: A survey on the ontology of occurrents

Abstract: This work presents a review of the ideas that are currently in use on the ontology-based conceptual modeling of occurrents (sometimes referred to as “events”, “perdurants”, or “processes”). It collects such ideas from a set of 11 ontologies, which includes some of the most important and widely used upper ontologies (i.e., BFO, UFO, DOLCE, YAMATO, SUMO, GFO). We analyze the ontologies with respect to the definition of occurrent they present and their understanding about participation, mereology, and causation. The commitments regarding these four facets of occurrents are gathered in three categories (pervasive aspects, complementary aspects, and conflicting aspects). Additionally, we …identify the main occurrent classification criteria used to branch the taxonomy of the ontologies. These findings are summarized in two tables at the end of the paper, which may be used by modeling practitioners as reference. The review shows that the considered ontologies agree in a significant set of common aspects as well as present some relevant divergences. However, there is a considerable set of non-conflicting, complementary aspects scattered among the diverse ontologies. It suggests an opportunity for efforts aiming to harmonize those views in a single approach that may enrich the analysis and representation of occurrents. Show more

Abstract: A fundamental issue concerning the treatment of meaning in context is how to deal with the extremely flexible relationship that appears to hold between descriptions , which are taken as the exchangeable bearers of meaning, and the actual contexts which those descriptions are taken to pick out. Such contexts appear always only to be suggested, or constrained, by descriptions of contexts and so relating levels of description, such as linguistic utterances, to actual contexts of use, such as a situated, fully embodied environment in which language users find themselves, remains an unsolved challenge. The present article sets out a …framework and illustrative implementation of an approach to contextualization that combines ontological engineering principles and situated embodied simulations. For concreteness, we illustrate the approach within an already established architecture for situated robotic agents in order to allow implementation and experimentation in a manner that is not generally accessible when considering linguistic analysis alone. The paper then proposes a hybrid, multi-level architecture that contextualizes linguistic utterances by means of embodied simulations, which then serve further as contextualization constraints on semantic interpretation. Show more

Abstract: This paper describes the layers of context leveraged by language-endowed intelligent agents (LEIAs) during incremental natural language understanding (NLU). Context is defined as a combination of (a) the perceptual stimuli available to the agent at the given point in time, and (b) the knowledge elements and reasoning activated at the given stage of the agent’s interpretation of those stimuli. This approach to NLU addresses the treatment of a large number of difficult linguistic phenomena that are essential for high-quality NLU but are not being tackled by the knowledge-lean approaches that are typical of modern-day natural language processing. Although LEIAs are …being developed as components of prototype application systems, this paper is not about implementations or evaluations – its contribution is conceptual, with everything described applicable to any artificial intelligent agent environment. Show more